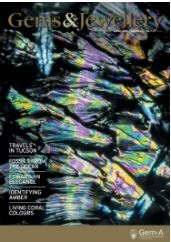 The name ‘grandidierite’ was first uttered in gemmological circles in the early 20th century, with its roots traced to southern Madagascar. It is so rare that few have ever seen the mineral in-person, let alone held faceted, gem-quality material in their hands. Grandidierite has a hardness of 7.5, which makes it suitable for jewellery use, although it is fragile and challenging to cut because of good cleavage in two directions.

Around 2014, a new deposit of transparent material in Tranomaro, Madagascar, resulted in some fantastic facetted gemstones, striking for both their bold colour and clarity. It is from this mining locale that Brice Gobin, gem explorer, collector, dealer and manager of Mineral Art sourced his magnificent collection of grandidierite gems over an 18-month period. Included in this selection were around 20 gems, weighing from one to 9.3 carats, with some being particularly significant for their deep green and bright blue hues. Having visited the mine site, Gobin predicts there may be only five top-quality grandidierite gemstones above three carats the world over.

As a passionate gem explorer, Gobin explains to Gems&Jewellery that he prefers to travel “where we can find the unfindable”. He continues: “I had heard about this new find of some little gem grandidierites in the south of Madagascar and so I set up a team to sit at the mine site for one year and work, but also to buy all the good stones that were found. Grandidierite was an obscure gemstone [at the time] unknown to most people and even most of the top gem dealers. The first known transparent faceted grandidierite [believed to be from Sri Lanka] weighed 0.29 carats and was purchased for USD $50,000 in 2003. The first stone with a top colour and high clarity I saw from that new deposit in Madagascar was almost two carats! I was amazed and decided to investigate further immediately.”

Described by Gobin as a “collector’s stone”, grandidierites with exceptional clarity can demand significant prices per carat, but this is often overshadowed by a lack of supply, minimal demand and lack of knowledge among high jewellers. “Grandidierite is too rare to be able to provide the jewellery market. No supply, no demand, it’s as simple as that,” Gobin says.

However, for collectors or specialists who are desperately seeking a rare faceted grandiderite above two carats… you are most certainly in luck. Stuart Wilensky, president of Wilensky Fine Minerals and the Wilensky Gallery in New York City, realised the chance to exhibit these rare gemstones was an opportunity not to be missed. Now, a selection of Gobin’s grandidierite gemstones will be available to view until at least June 2019.

Wilensky explains: “The Wilensky Gallery specialises in the very finest mineral specimens of any given species. Our focus has always been towards offering mineral specimens that exhibit the ultimate qualities directed towards advanced mineral collectors and museums. We have always valued the artistic aspect of minerals, but also believe that with depth of knowledge collectors can appreciate a piece for its rarity, locality or crystal size.” Having mastered the art of finding museum-worthy mineral specimens, Wilensky saw the benefits of expanding into cut gemstones and displaying the finest examples alongside his ‘raw’ materials. “We all agreed the grandidierite stones would be a great starting point for us to explore the rare gem world and evolve our growing concept of what we envisioned for our new NYC gallery.”

After much research, the Wilensky Gallery team chose three stones based on their “exceptional quality, unusually large size, vivid colour and fine cutting” to exhibit. They are also available to purchase. The first gem has a beautiful, almost electric blue tone and weighs 2.86 carats. The second is a much deeper blue-green oval-shaped gem of 3.14 carats, while the third has flashes of dark forest green (thanks to grandidierite’s trichroic pleochroism) and weighs a staggering 4.96 carats. They are priced at USD $69,000, $78,000 and $129,500 respectively.

When the grandidierites are removed from display this summer, the Wilensky Gallery will quickly put the finishing touches to its emerald exhibit, due to run from September 26 to December 30, 2019. Wilensky explains: “This exhibit will include several of the finest-known emerald specimens from private and public collections. We will also have fine emerald cut stones, jewellery and emerald carvings displayed with the specimens.” Should your passion for the rare and unusual take you to New York City in 2019, we encourage you to stop and see what the Wilensky Fine Mineral Gallery has on display.