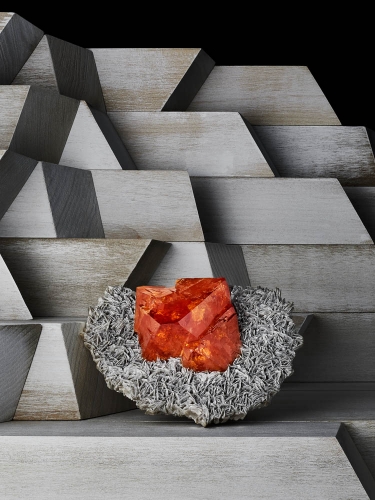 Whether or not you feel your chakras could do with some realignment, it’s unlikely the term “crystal healing” has passed you by. The hashtag crops up 5.3m times on Instagram, and Google searches for the term have risen 60 per cent over the past decade. The alternative-wellness trend is based on the theory that crystals such as rose quartz or black obsidian – favourites of Gwyneth Paltrow and Victoria Beckham – rebalance the body’s electromagnetic field.  While demand for diamonds could have dropped by as much as 25 per cent in 2020, the value of crystals such as quartz, amethyst, citrine and malachite is holding steady. “Our first standalone mineral sale was in 2014 and we took £800,000,” says James Hyslop, Christie’s head of natural history. “Our sale last October did £1.4m. It is very much a market that is on the up.”

But it’s not the new wave of New Age spirituality that’s driving the high end of the market, says Rob Lavinsky, a doctor of molecular genetics and founder of Dallas-based crystal dealership The Arkenstone. “It’s a new class of collectors. They’re not scientists, they didn’t start collecting as children – as rockhounds buying $5 minerals. They are coming in from other collectable worlds – coins, cars, antiques, art – and have no problem paying £10,000, or $100,000 for quality.” The finest minerals on his website typically range from $100,000 to $500,000. “The absolute top things”, including a few over the $2m mark, are not listed online.

“The type of systematic collecting pioneered by 18th-century European aristocrats for their Wunderkammern has sort of gone,” agrees New York dealer Daniel Trinchillo, founder of Mardani Fine Minerals, adding that today’s major mineral players include Salim Eddé, whose collection opened Beirut’s Mineral Museum (MIM) in 2013, and Guy Laliberté, founder of Cirque du Soleil. They are looking for “works of art – amazingly beautiful, sculptural objects”, says fellow New York dealer Stuart Wilensky. “We never know what will come out of the ground tomorrow,” Wilensky adds. “And this has a dynamic effect on collecting.” Most popular are “the colourful minerals – tourmalines and calcites, even amethysts and quartzes”. And fluorite in particular. “It comes in nearly every colour, from hundreds of locations around the world,” explains Wilensky’s website, where a 4.5cm-high specimen of lavender-hued cubic fluorite from China is $3,975, and a sought-after combination of pink fluorite and smoky quartz from Switzerland is $855,000.

Recently, the field has come under scrutiny for its supply chains, sustainability and wage thresholds. “Our business is not regulated,” says Wilensky. But the focus seems to be inspiring systemic change. London seller She’s Lost Control has a Sustainable Mining Initiative with a Brazilian mine. Lavinsky says he “consciously drives a price spiral” in source countries. And Ian Bruce of Crystal Classics, a leading UK dealer, now operates Europe’s only specimen mine, in the north of England. “We employ 14 full-time miners,” he says. “The market is now so strong that it’s commercially viable – and we’re seeing the same thing in the US, South America, Asia, Australia.”

The auction houses – including Sotheby’s and Heritage Auctions in Dallas – are relative newcomers to the realm. As such, “We haven’t seen good specimens hit the auction world yet”, posits Bruce. His Somerset showroom is a destination for CEOs and international celebrities, who might leave with an aquamarine from Pakistan ($100,000) or an African druzy chrysocolla ($90,000). One of Bruce’s most serious customers has 130 treasures, housed in a custom-made glass-fronted cabinet. “I go for aesthetics. I love the sheer magic of how they’ve formed – in some cases a billion or more years ago – and the sense of permanence.” Pointing to his collection, he says, “That’s one of the rarest forms of beryl, from Utah”.

The London home of spatial designer Robert Storey shows a more relaxed side of the collector coin. “I have a bunch of crystals around my house,” he says of the pieces bought on his travels and grouped casually on tabletops. “I don’t know much about their metaphysical qualities, I just love the way they look. My favourite is azurite-malachite. It’s green and blue – I like to think of it as land and water.”  To capitalise on the growing market for less-rare specimens, and those with a happenstance approach to collecting, Lavinsky runs MineralAuctions.com, where bids start at $10: “At $500 to $5,000, you can build a really fun collection.” More fun still, for some collectors at least, is to turn sourcing crystals into an experience. In the US, you can do the mining yourself – pay-to-dig mines are undergoing a resurgence, as modern-day gem hunters seek their fortunes. Or just a nice chunk of quartz – and a bit of a fossick.

PDF Magazine Download
View on Financial Times
Back To Top